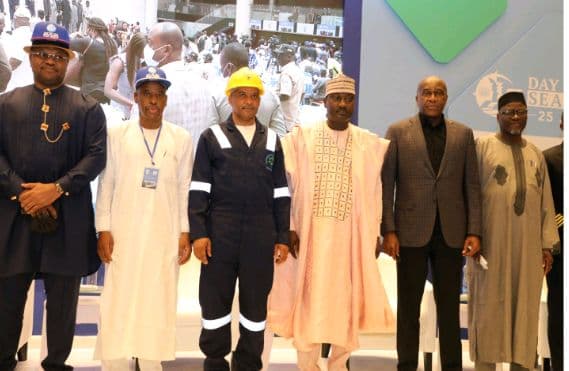 By: FRONTLINE REPORTERS
In: SHIPPING

Director General of the Nigerian Maritime Administration and Safety Agency (NIMASA), Dr. Bashir Jamoh has made a passionate appeal to the international communities to reconsider the war risk insurance premium charged on cargo headed for the Gulf of Guinea.

The NIMASA boss made the plea Friday at the Seafarers’ Day in Lagos, while also, reacting to the response of the Lloyd’s List Intelligence, a specialist business information service dedicated to the global maritime community, to his earlier call for review of the high insurance based on improved security conditions in the region.

Jamoh stated, “Since the world now acknowledges our commitment to maritime security and the recent improvements in security, it is only fair that relevant stakeholders should begin to rethink the charges that predated such efforts by Nigeria.

“The poor masses of this country should not be made to pay for the actions of a few individuals bent on tarnishing Nigeria’s image.”

Earlier the Minister of Transport Right Hon. Rotimi Amaechi emphasized the need to use the Seafarers’ occasion to further identify and proffer workable solutions to the issues that will still be relevant to the seafarers after the pandemic, such as fair treatment, living and working conditions of the seafarers, etc.

He highlighted the harrowing experiences seafarers endured in the course of their job, especially at the peak of the COVID-19 pandemic last year.

“| am, however, glad to inform you that Nigeria, as a member state of the IMO, was one of the first countries to declare seafarers essential workers in order to ease their sufferings,” the Minister stated. He added, “The nation through the Federal Ministry of Transportation and its Agencies will continue to ensure that government policies are tailored towards improving the welfare and working conditions of the seafarers in line with international standard and statutory conventions.”

Amaechi further challenged ship-owners and other stakeholders in the Nigerian maritime industry to device creative means of ensuring improved welfare for seafarers, while proffering permanent solutions to issues that affect their work.

The Minister extolled seafarers in Nigeria and the world over for their enormous contributions to global commerce and economy, generally, saying seafarers “contend with perils of the seas and sometimes put their lives on the line just to ensure that goods are safely delivered at designated ports. This is one of the reasons we celebrate the seafarers every year.”

Amaechi reiterated the commitment of the Nigerian government to ensuring that the country’s maritime domain remained safe and secure for seafarers working on ships transiting through the waterways. He identified the Deep Blue Project launched by President Muhammadu Buhari on June 10 as a major effort by the government to curb the hazards of seafaring.

He said the provision of the integrated maritime security architecture was “to help combat these maritime criminalities that hinder the security of crew members.”

Besides, the Minister said, Nigeria now has an antipiracy law, the Suppression of Piracy and Other Maritime Offences Act 2019, to prosecute maritime offenders.

Jamoh restated his call on the international community to reexamine the war risk insurance imposed on Gulf of Guinea-bound ships, saying security conditions in the region are rapidly improving.

“It is significant that critical stakeholders in the world shipping community, like Lloyd’s List, are recognising Nigeria’s efforts to make the Gulf of Guinea safe and secure for seafarers and ships,” the Director General said. “But it would be unfair for the world to sidestep such huge investment and commitment to maritime security and retain the high war risk insurance premium on ships bound for our waters.”

He said continuing the war risk insurance would be a disservice to Nigeria and investors in the country’s maritime environment.

The highlight of the event was the presentation of Certificates of Competency (COC) to cadets of the Nigerian Seafarers Development Programme (NSDP) who recently graduated from the Arab Academy for Science, Technology and Maritime Transport, Alexandra, Egypt, by the NIMASA Director General.

June 25 every year is designated as the Day of the Seafarer by the International Maritime Organisation (IMO) to celebrate seafarers and their contributions to human progress.

There was wide participation by maritime stakeholders in this year’s event.

2021-07-17
Previous Post: We Lose 400,000 Barrels of Oil Daily to Thieves, Says Minister
Next Post: No Amount Of Threat Will Stop Ndigbo From Demanding Just Treatment – Abaribe