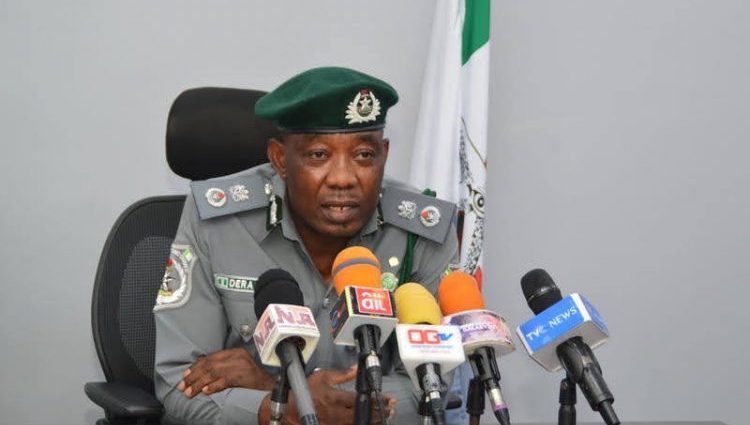 Bad Christmas for smugglers, As Ogun 1 Command seizes 12 lorry loads of foreign rice, others worth N172million

By: Godwin Obi
In: BUSINESS

The Nigeria Customs Service Ogun1 Area Command has seized a total of 12 lorry loads of foreign parboiled rice and other contraband items valued at N172.9million in the last one month.

The commendable exploit was coming in the wake of the relaunch of the command’s anti-smuggling campaign. The command also generated a total of N2.4million revenue mainly auction sale of seized petroleum products, especially the Premium Motor Spirit PMS and scrap metals, given that Federal Government’s directive on border closure is still in force and so no import and export activities.

Basking in the euphoria of these exploits, the Controller of the Area Command, Comptroller Dera Nnamdi, who was deployed to the Command on the 18th of October said in a press briefing recently at his Command, that a total of 365.55 kilogrammes of parboiled rice was seized from some unrepentant smugglers in the course of their routine job. The CAC stated that “In the area of anti-smuggling operation during the period under review, the Command has been able to record some spectacular seizures of Seven Thousand Three Hundred and Eleven (7311) bags of 50kg foreign parboiled rice.

Nnadi also indicated the seizure of these items:12 legs of 25 litters vegetable oil totalling 300 litters in volume, 20 units of motor vehicles that were used for conveying some of the smuggled items, 2 units of motorcycles used as conveying vehicles for some of the items, 4 bales of 25 each of used clothes plus sacks of same items, 26 sacks of used shoes, 637 kilogrammes of Cannabis sativa packed in various ways, 2 bundles of used tyres and 4 pieces with rims, 20,775 litters of premium motor spirit in 831 kegs, 810 cartons of frozen poultry products and 4 sacks of used toys.

The cumulative duty paid value (DPV) for all the seizures amounted to One Hundred and Seventy-Two Million, Nine Hundred and
Ninety-Nine Thousand, Three Hundred and Eighty-Seven Naira and Zero
Kobo (#172,999,387.00).

The CAC said that “The Command generated a total revenue of #2,437,050.00 during the period under review, which are mainly proceeds of auction sales of seized petroleum products (PMS) and scrap metals.

It should be noted that Federal Government of Nigeria’s directive on border closure is still subsisting, hence, there is no revenue generated from imports activities”.

He stated that the Command is deploying intelligent means of information gathering and in the rule of engagement with stakeholders resulting in more successes with less casualties.

He warned smugglers to desist from taking to this illegitimate trade and to seek more legitimate means of livelihood. as he thanked all stakeholders including the Controller General of Customs, royal fathers, media people and all well meaning persons for their support.

To this end, we have been engaging the youths who form the bulk of the human capacity asset in Ogun State particularly at the border areas. We have also been engaging the elders of the communities who in all honesty have a good knowledge and understanding of the challenges of enforcing government policy in the border especially as the borders remain closed.

Let me use this medium to thank them for accepting to continuously help in this direction.

We are also reaching out to the state governor who is the chief security officer of the state in this direction and the future looks mutually very rewarding for Nigeria Customs Service and the state”.

He noted that the continuous attacks on Customs and other security operatives in the state by unpatriotic people will not deter it from sustaining the onslaught on their smuggling activities.

“We are determined more than ever before to carry out our anti- smuggling operations without let or hindrance”, he said.